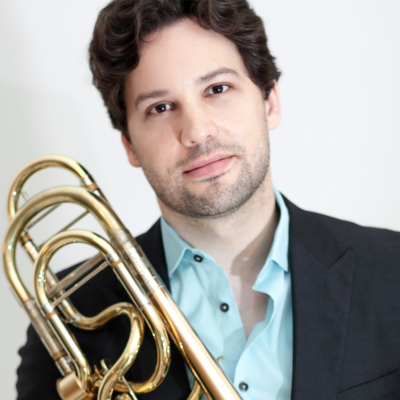 Zachary Bond is Professor for Trombone at the Hong Kong Academy for Performing Arts (HKAPA, CN). He is also the Artistic Director of the Thai International Trumpet Festival in Bangkok (Thailand) and the Singapore International Low Brass Academy.

A native Texan, Zachary Bond was accepted to Philadelphia’s Curtis Institute of Music when he was 16 years old. Zachary’s teachers include Jon Bohls, Keith Meek, Blair Bollinger, Scott Hartman, Mark Lawrence, John Rojak, and Steve Norrell. After receiving his Bachelor of Music degree from The Curtis Institute in 2003, Zachary went on to attend Yale University on a full scholarship the following year.

Zachary is a regular adjudicator for the International Trombone Association Competitions preliminary and final rounds and has also been on the Jury of the Jeju International Bass Trombone Competition in Jeju, Korea. He was also on the faculty of the National University of Singapore’s Yong Siew Toh Conservatory of Music teaching tenor and bass trombone and the brass specialist at the Australian International School in Singapore. Zachary is currently the Lecturer of Brass and Wind Ensemble conductor at the Hong Kong Academy for Performing Arts, and the Artistic Director of the Thailand International Trombone festival in Bangkok, Thailand.

A passionate educator, Zachary has been a regular guest lecturer and performer globally. Zachary has been in residence at the Louvre Museum in Paris, the Sibelius Academy in Helsinki, as well as numerous venues in the United States, Brazil, Canada, China, England, Hong Kong, Japan, Korea, Malaysia, Singapore, Thailand, and Mexico. Zachary was invited as a guest artist at the 2010 International Trombone Festival in Austin, Texas and was invited once again to the 2013 International Trombone Festival in Columbus, Georgia. In 2016, Zachary premiered Sheridan Seyfried’s Concerto for bass trombone and orchestra with the US Army Orchestra in Washington D.C. conducted by Colonel Timothy Holtan.

Zachary performed on four newly released albums. The Canadian Brass’s “Echo, The Glory of Gabrieli”, the Houston Symphony’s DVD collaboration with NASA celebrating the advent of High Definition Hubble Telescope images set the music of Gustav Holst’s “The Planets” suite, culminating in a live performance on tour to New York’s Carnegie Hall and Dvorak’s 7th and 8th Symphonies with the Malaysian Philharmonic and Claus Peter Flor. Zachary performed in China with the Canadian Brass on Hunan Tv’s Chinese New Year show for over half a billion viewers.