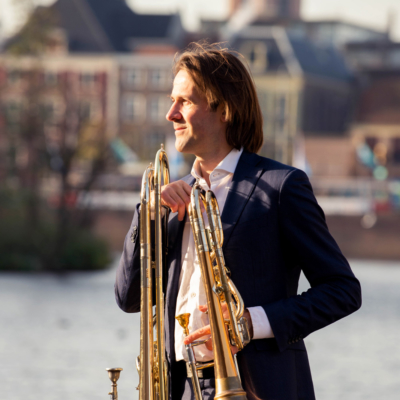 Brandt Attema is professor for trombone at the University of Music in Karlsruhe (DE). He is a member of the Nederlands Blazers Ensemble, the New Trombone Collective and the Slide Monsters with Joe Alessi, Marshall Gilkes and Eijiro Nakagawa. Attema has been playing in a duo with the harpist Astrid Haring since July 2008 and the two have since performed numerous times all over the world.

From 1999 to 2019 Attema was a member of the Radio-Philharmonic Orchestra of the Netherlands. As a guest he played with many Dutch and international orchestras such as the Lucerne Festival Orchestra, the London Philharmonic Orchestra and the Berlin Philharmonics. As a member of the New Trombone Collectives, Brandt Attema is involved in the organization of the Slide Factory Festival, an international trombone festival in Rotterdam that takes place every two years.

As a teacher he taught at both the Royal Conservatoire of The Hague and the Codarts in Rotterdam (NL). Attema is currently professor for trombone at the University of Music in Karlsruhe (DE).
THEIN was a great discovery for Brandt at the beginning of his musical career. He says about the instruments: “Sound and flexibility are what make the instruments unique. They surprise every day with new colors and effects.” As well as: “The THEIN trombones support my creativity and are absolutely reliable. ”(Attema Brandt).