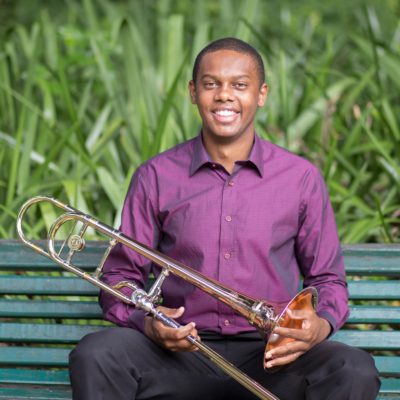 Raphael Campos da Paixão is the principal trombone of the Brazilian Symphonic Orchestra and the Symphonic Orchestra of the Municipal Theater of São Paulo (BR). He also takes part in chamber music projects, teaches and gives master classes all over Brazil.

He was born in São Paulo, Brazil in 1984. In 1999 he began to study the trombone with Carlos Freitas. He then studied at the most important music schools in Brazil and Europe, such as at the Fundação das Artes de São Caetano do Sul (SP – BR) with Prof. Valdir Ferreira, at the Faculdade Santa Marcelina (SP – Brazil) with Prof. Darcio Gianelli and at the Music Academy of the State Symphonic Orchestra of São Paulo (BR) under the direction of Professors Darcio Gianelli, Wagner Polistchuk and Darrin Milling. In Europe, Raphael studied at the Codarts Academy in Rotterdam (NL), under the direction of Professors Jorgen van Rijen, Pierre Volders, Remko de Jager and Ben van Dijk.

In 2003 Raphael won the competition for young soloists of the Municipal Band of Ribeirão Pires. In 2005 he won 2nd place in the brass competition of the Universidade Livre de Música São Paulo and 3rd place in the national (Brazilian) competition Isolisti. In 2008 he was a semi-finalist in the TV show Prelúdio on TV Cultura.

Raphael Paixão has participated in important national and international music festivals. These include the International Festival of Campos do Jordão in 2007 and 2009, the Santa Catarina Music Festival Femusc in 2009, the Music Workshop in Curitiba (Brazil) in 2004, 2008 and 2010 and the Slide Factory – The International Trumpet Festival in the Netherlands in 2011.

As a teacher and soloist, he has also taken part in the following events: The international trombonist meeting of the Brazilian Trombonists Association (ABT) in 2012, the 1st International Festival des Projeto Bone Brazil together with Ben van Dijk in 2013 and in 2015 together with Zachary Bond.