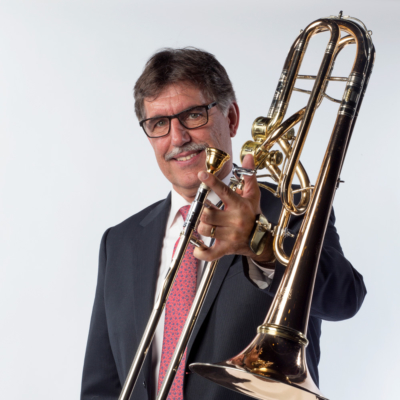 Born in 1955 in The Hague, Ben van Dijk received his first trombone lessons from his father, Piet van Dijk, who at the time was solo trombonist of The Hague Philharmonic Orchestra.

Ben has also given master classes and recitals in Korea, Japan, Greece, Hungary, Sweden, England, Scotland, France, Spain, Brazil, Venezuela, Peru, the USA and many other countries.
In March 2014 he was elected First Vice President of the ITA (International Trombone Association).

He has released six solo CD’s, “Nana”, “First Song”, “Melody”, “Never Alone”, “World Concerto” and “Brisas Andaluzas” which all received praising reviews in the most important brass/trombone magazines of today.

In recognition of his contributions to the ITA and to the trombone community at large Ben van Dijk was the recipient of the 2003 ITA Award. This award is the ITA’s most prestigious citation and it recognizes Ben’s artistic achievements and his tireless efforts in promoting and improving global trombone performance standards, brass pedagogy and instrument design.

In 2017 Ben received the ITA Neill Humfeld Award. This award is given for Excellence in Trombone Teaching, recognizes the trombone teaching contributions of the late Neill Humfeld and honors living teachers who have achieved the highest level of excellence in their work.

Also in 2017 Ben was elected as President of the International Trombone Association for a period of 3 years the most honorable position within the ITA.
Since 2019 Ben van Dijk has been teaching as a professor at both the Royal Conservatoire in The Hague and the Codarts in Rotterdam.
Since 1990 Ben van Dijk and THEIN have been working together on the development of bass and contrabass trombones. The “B v D” – Trombone models emerged from this longstanding collaboration.