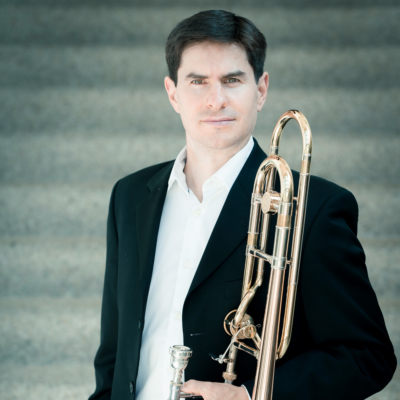 David Garcia has been principal trombone at the Zürich Opera House (CH) since 2007.

He was born in San Antonio (TX, USA). He studied at the University of Texas at Austin with Donald Knaub and at the Juilliard School with Joseph Alessi.From 1997 to 2000 David Garcia was appointed Principal Trombone at the Maggio Musicale Fiorentino in Florence (IT) by the conductor Zubin Mehta.

David Garcia played as a guest in major European orchestras such as the Tonhalle Orchestra Zürich (CH) or the Orquestra Sinfonica de Galicia (ES). Due to his versatility as a musician, David Garcia is often requested as an alto, tenor and bass trombonist as well as a bass trumpeter and for historical instruments. He can be heard on the RCA and Phillips labels as well as on many opera DVDs recorded live in Zurich. His critically acclaimed performance of Jeff Tyzik’s Concerto for Trombone and Orchestra with the Hartford Symphony Orchestra was broadcast live on the radio in 2004.
As a soloist David Garcia played among others with the Hardford Symphony Orchestra and the Brass Band of the Zürich Opera.