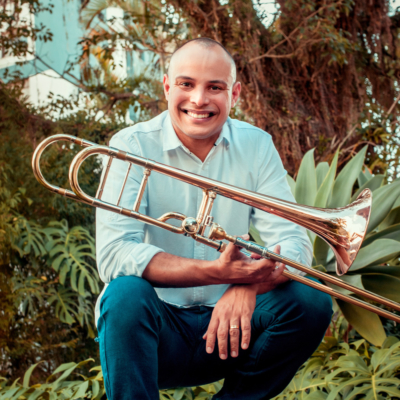 José Milton Vieira is the principal trombonist at the Porto Alegre Symphony Orchestra (BR) since 2006. He is a member of the Quinteto in Porto Alegre and teaches at the Pablo Komlós Conservatory and on the online platform Play With a Pro.

He is one of the representatives of the new generation of the Brazilian trombone. In addition to numerous appearances in his home country, he has already appeared on the major stages in the USA, France, Switzerland, Venezuela, Cuba, Germany and Italy. In 2018 he played as a guest artist at the International Trombone Festival (ITF) in Iowa (USA). With the Army Field Band and the composer Johan Meijs himself as conductor, he played the T-Bone Concerto by Johan Meijs.

José Milton is the winner of numerous national and international music competitions. For example, he received the first prize and the audience award at the 26th Concorso Internazionale Città di Porcia (IT, 2015), first prize at the Lewis Van Haney Philharmonic Competition 2012 in Paris, he won the soloist category of TV Cultura’s Preview (São Paulo, BR 2012 ) and the second prize of the Fair Radegundis competition for solo trombonists (Belém, BR, 2012).
In addition, he was awarded the prize for the best interpretation of the commissioned work “Is My Shoe Still Blue” by Christian Muthspiel at the 64th ARD International Music Competition (Germany, 2015).

José Milton Vieira studied at the Brasília School of Music, the University of Brasília and the Federal University of Rio Grande do Sul (Brazil). In April 2012 he received a scholarship from the American Consulate General in Brazil as a visiting student at the Julliard Music School from Professor Per Brevig (mentor). José Milton Vieira’s professors at the time were Paulo Roberto da Silva, Carlos Eduardo Mello and Lucas Borges.