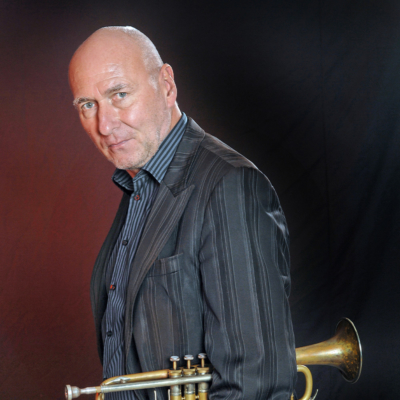 Ulrich Beckerhoff was a co-founder of the bands Jazztrack, Riot and Changes, with which he toured almost all of Europe and performed at almost all major festivals. He has received several national and international prizes.

Under his own name, as a co-leader and soloist, he recorded more than 40 LPs and CDs and performed with numerous European and American artists: Albert Mangelsdorff, Palle Danielsson, John Scofield, Maria Joao, Charlie Mariano, Zbigniew Seifert, Adam Nussbaum and others.

Beckerhoff headed a trio with John Marshall and Jasper van`t Hof and a quartet with John Abercrombie, Arild Andersen and John Marshall. At the EBU concert in Barcelona he represented the ARD and was invited as a soloist by the guitarist Volker Kriegel on a tour for the Goethe Institute, which led through 11 African countries. He worked with the United Jazz and Rock Ensemble, the NDR Big Band, the Michael Gibbs Orchestra, the Manfred Schoof Big Band and the Hessischer Rundfunk Jazz Ensemble.With the Jazzpool NRW he made guest appearances at the EXPO in Seville and with John Taylor and Maria Pia DeVito at the EXPO Hanover. He led bands with musicians such as John Taylor, Anders Jormin, Rita Marcotulli, Matthias Nadolny, Gunnar Plümer, Jo Thönes, Michael Berger, Wolfgang Engstfeld, Maria Pia DeVito, Peter Weiss, Peter O`Mara, Bruno Castellucci, Glauco Venier and others.

His project LA VOCE with singers Norma Winstone, Rosani Reis, singer Giacomo di Benedetto and bassist Hartmut Kracht has been invited to many concerts and festivals. He was guest and soloist of the NuJazz group BoomBoom as well as the symphony orchestras of the cities of Bremen, Oldenburg, the Radio Philharmonic Orchestra of the NDR in Hanover and the orchestras in Nuremberg and Trier. He is also the band leader of the International Skoda Allstar Band.

Beckerhoff was musical advisor in Weimar, European Capital of Culture in 1999 and is artistic director of JAZZAHEAD, the largest Jazz Festival in Europe.
He gave numerous master classes at jazz workshops in Berlin, Burghausen, Münster, Weimar, Bremen, Trier and Udine and is a professor at the jazz department of the Folkwang University of the Arts in Essen.

In addition to an electric-acoustic trio with the drummer Stefan Ulrich and the keyboard player Michael Berger, Beckerhoff gives concerts with the overtone singer and multi-instrumentalist Reinhard Schimmelpfeng with purely acoustic music that draws its influences from different musical cultures.

In the RoRoRo Jazzlexikon, Martin Kunzler describes Ulrich Beckerhoff as a musician who “quickly conquered a top position in German and European jazz […] with a very distinctive, dynamic, finely differentiated expression, whose appeal was described by the critic Joachim Ernst Berendt as a combination of a typical sensitivity describes great intensity and power. ”