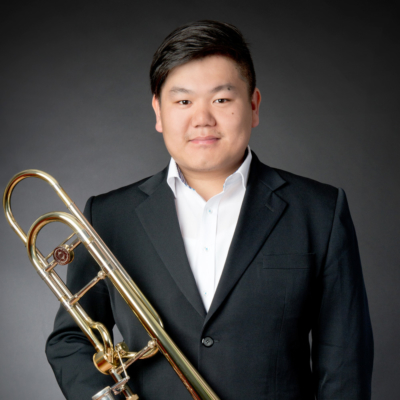 Wei Zhu is Professor for Trombone at the Shanghai Conservatory of Music (CN).

From September 2001 to August 2007 Wei Zhu studied trombone with Prof. Dali Li at the Music Middle School of Shanghai (CN). This was followed by studying the trombone with Prof. Henning Wiegrabe, Frank Szathmáry-Filipitsch and Prof. Fabrice Millischer at the Saarland University of Music (DE). Since 2016 he has been training as a concert soloist at the University of Music and Performing Arts, Mannheim (DE).

For the 2010 season, Zhu was solo trombonist at the Trier Theater (DE). During this time he began working as a trombone teacher at the music schools in Saarbrücken, Hanover and Bremen. After a brief activity as coordinated solo trombonist and 2nd trombone for the Bochum Symphony Orchestra, Wei Zhu has been playing as solo trombonist with the Bremen Philharmonic since 2012.

Since 2012 he has been a tutor for the international master class at the Shanghai Conservatory of Music (CN). From 2013 onwards Wei Zhu taught trombone at the University of the Arts, Bremen.
Wei Zhu can be heard e.g. on various CD recordings of the German Radio Philharmonic Saarbrücken-Kaiserslautern. In addition, he has given numerous master classes in various European countries (e.g. France, Italy and the Netherlands), USA and Asia.